Aaron Hotchner rechecked his watch, hating how the hands ticked closer to midnight. His team wasn’t even supposed to be on duty today, but a spree killer in Seattle pulled the entire team across the country, hoping to prevent more deaths. They’d succeeded, but the cost was being gone when he had planned to be on vacation with his family. Additionally, he was arriving home a full day after his worst-case estimate, missing the special dinner Tony had planned for them.

“Checking your watch won’t make the plane land any faster,” Rossi murmured from his seat across from Aaron.

“I know.” He sighed and pulled his cuff lower to cover the watch face.

“You know Tony understands about the job,” Dave added.

Hotch winced. That was the crux of the issue. It wasn’t just about working on Christmas Eve, it was all the commitments that came before his partner. “Haley hadn’t been able to handle my responsibilities,” he admitted, feeling guilty for even mentioning the issues that had led to their divorce.

“Many spouses and romantic partners struggle with it.” Dave’s tone was bland, and the dry voice of experience on the subject. “But Tony does understand.”

Hotch stared at his nearly empty coffee cup. He hoped so. The relationship was only six months old, but it felt so very vital. And it wasn’t just Hotch who’d gotten in deep—Jack loved Tony fiercely, and Aaron knew the reverse was true as well.

“Tony,” Aaron admitted. “He’d arranged the 21st through the 2nd for our vacation. Said there was no reason he couldn’t spend time with Jack just because I’d been called out of town.” He frowned at Rossi. “Why are you giving me that look?”

“You’re damn close to living together, aren’t you?”

Hotch shrugged. “He’s at my place more often than not.” He hesitated. “I like having him there.”

“You’re letting past history hang you up. You got lucky to get someone in the same field, with the same work pressures.”

“Tony’s work isn’t as unpredictable as ours.”

“No, but it used to be, and you know that. Whatever project he’s working at Homeland seems to have steadier hours, but I’ve heard stories about the multi-day stretches his team at NCIS used to endure. Talk to him before you get so worked up.”

He nodded tightly. The issue was more how much he hated disappointing his lover than it was real worry that Tony wouldn’t understand why Hotch had to be away.

Morgan got up from his seat at the front of the plane and joined them, sliding into the place next to Rossi. “Just got word from Garcia. We’re going to make it in barely ahead of a major snowstorm. The forecast predicted snow in the morning, but it’s hitting early.”

Annoyed at yet another thing, Hotch scrubbed his hands over his face. Last he’d heard, this weather front was predicted to drop a lot of snow on Virginia and Maryland. Would he even be able to make it home? It was only about twenty miles to his house, but that could easily be insurmountable.

As soon as the plane touched down at the small, private airfield near the FBI campus, he tried texting Tony to let him know they’d arrived. There was no reply, which didn’t necessarily mean anything. Tony could have fallen asleep or be helping Jack if he’d woken up.

When they stepped off the plane, the snow had just started to fall, thick and heavy with small clumps beginning to accumulate on the ground. By the time they’d navigated the Bureau-issued SUVs back to their building, the sky had opened up and visibility was severely diminished. A couple of inches of snow had already accumulated.

If Hotch lived a mile away, he might chance it, but he knew he’d be foolish to get on the road in this.

They all hurried inside the building then stood at the door and watched as the snowfall seemed to get even heavier.

Derek clapped Hotch on the back. “Might as well go up and drop our gear. No point in getting on the road now. My vehicle can handle the snow, so I can drop people off as soon as it’s safe to try.” He focused his attention on Hotch. “We’ll get you home for Christmas.”

As soon as they stepped off the elevator, the sound of Tony’s laughter caused Hotch to freeze in place. Another man’s laughter came next along with a woman’s.

“Is that Will?” JJ darted forward, and Hotch managed to get his feet in motion.

Hotch pushed open the door the BAU bullpen and found Tony, Will, and Garcia perched on the team’s desks sipping from big mugs. There was a small, decorated tree on another desk with a mound of presents. The whole room smelled like mulled cider.

“Hey!” Tony said brightly, hopping off the desk. He crossed to Hotch and pulled him into a hug. “Merry Christmas.”

Managing to shake off his shock, Hotch wrapped his arms around Tony, letting his bags fall to the floor. Tony smelled so good, and Hotch took a moment to just breathe him in. “How are you here?”

He stepped back and looked around to find a similar reunion between JJ and Will while Garcia was flitting around hugging everyone, leaving lipstick marks on most cheeks.

“We were paying more attention to the weather than you guys were. I figured you were gonna get stuck.”

“He and Henry are asleep in your office.” He wrapped his arm around Aaron’s shoulders then leaned down to retrieve his bag, dragging him toward the others. Tony took a moment to greet everyone. “I figured the weather could wind up being a disaster, so I booked everyone in at the lodge down the road for tonight.” It was only a mile away and an ideal solution to trying to drive in this mess. The only reason Aaron hadn’t considered it sooner was that he didn’t want to spend Christmas apart from his family.

“Will and I combined forces to pack up whatever dinner we’d made. It’s in the conference room.”

“I’ll join you,” JJ murmured, moving up next to him.

Hotch crept into his office. The sofa cushions from his office and Rossi’s had been put on the floor with a mound of blankets and pillows, and both boys were snuggled in, deeply asleep. JJ knelt down by Henry, smiling softly as she tucked the blankets up around his shoulders. Hotch went to one knee by Jack, carefully brushing the hair off his forehead.

When they stepped back out of the office, closing the door gently, JJ smiled up at him. “That was really sweet of them.” She pressed her hand to her chest. “I feel better.”

Back in the conference room, he found everyone dishing up food and talking. Tony had prepared both their plates already, so Hotch sat next to him then reached out to take his hand.

“Thanks for this,” Hotch murmured, holding tightly.

Tony smiled and leaned in, pressing a kiss to the corner of Hotch’s mouth. “You’re welcome.”

It was already well past midnight, and the worries of a bleak holiday and all the stress of the last few days just faded away. He moved in for a more serious press of lips. “Merry Christmas, Tony.”

Half of my prompts for the Advent Calendar were for art, and I chose to do companion pieces for my stories. One of the art pieces I submitted, titled Serendipity, sort-of prequel to this story, visually telling the story of how they met. 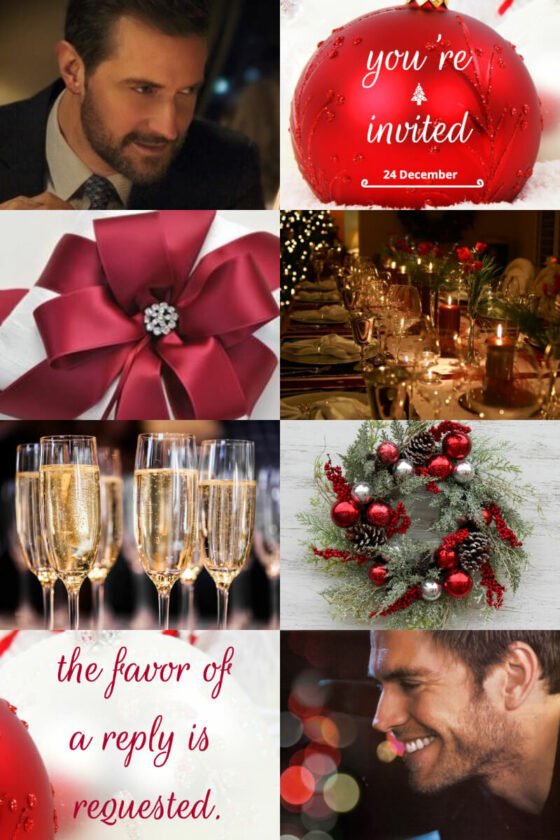